The inaugural exhibition ADZ presents new paintings and a video installation by French artist Brice Guilbert. Its title, ‘Sang Dragons’, is the name of a school on the Indian Ocean island of Réunion, off the coast of Madagascar, situated in the shadow of Piton de la Fournaise, a great hulking volcano whose latest eruption boomed only in April this year. Brice grew up on the island and, as a child, found the Piton’s looming presence hard to ignore: he would often daydream of hot lava spitting and puking from the crater, in both awe and agitation.

He now lives in Brussels, where he realised that he could interpret and re-examine an eruption he both yearned for and dreaded, yet never once witnessed: the beauty, the excitement, the fear. ‘Sang Dragons’ is eleven paintings from a series spanning five years of ostensibly the same view, repeated with differences in colour and scale.

Even now, while he paints from his studio in the north of Europe, the lure of his Indian Ocean childhood spent transfixed by the volcano continues to excite him. In reverence to the intensity of an erupting volcano, Brice paints armed with a heat gun and an array of oil bars, which he makes himself. The whirring gun melts the hard paint, making the texture softer and more malleable – his lava. By keeping the paintings alive with nature’s elements of air and fire, his process mirrors red-hot magma seeping into fissures of rock, before drying, basalt-hard. Brice varies each painting with muddied colour palettes, working at different speeds while the paint cooks and coagulates on the surface. For ‘Sang Dragons’, you’ll notice his tones are fuzzy, as if cast behind a vapour of volcanic smoke. There are similarities with Claude Monet’s 19 paintings of the Houses of Parliament which were painted in a similar murky light between 1899-1901, a warm glow of sun piercing the veil of London smog in front. Monet would document the skyline from dawn to dusk, deftly painting the subtle shifts of light throughout the day. Similarly, in Brice’s documentations of time passing, he mixes tones from his imagination, transposing them under radiant thick volcanic soot. His palette and this light feel quite at home in Lisbon, where vibrant days emerge from early-morning mists. 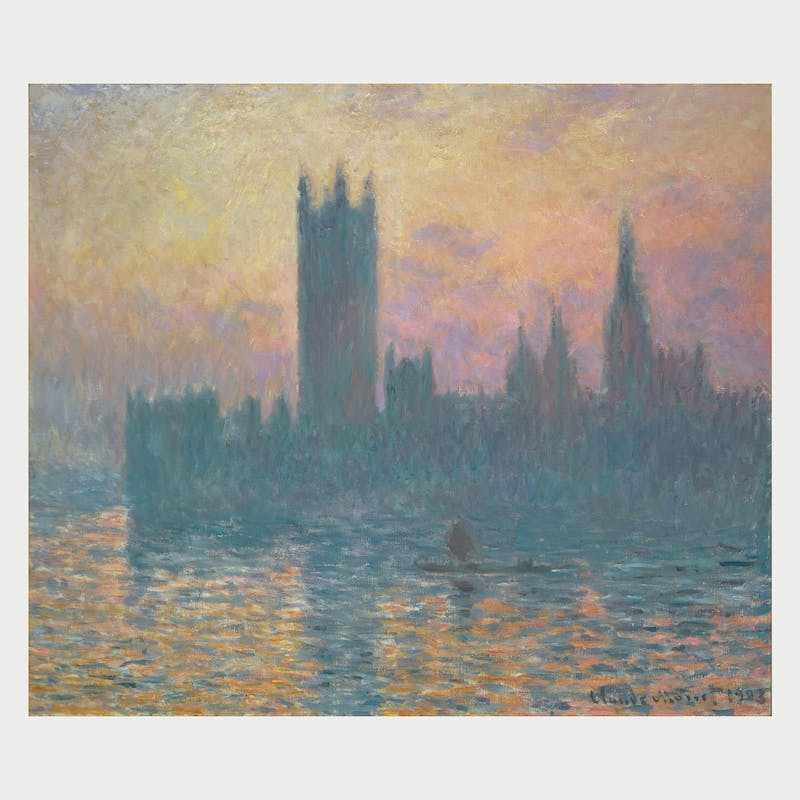 As a self-taught musician, Brice likens the meditative process of repetition to the protracted reverberations from his guitar – applying paint as if he were strumming chords in a long melody. In Dimitri Carez’s film which accompanies the series, Brice wanders the cliffs of Réunion, stopping intermittently to paint the dazzling sun beyond. The flecks of refracted light on the Super 8 allude to the lurid craters in his paintings – and you’ll notice the calming hum of his music fading in and out like the undulating waves behind.

When he began painting the volcano in 2016, he’d work directly on top of torn pages from ‘Le Dessin Francais Au XIX Siecle’ – a black-and-white printed anthology of canonical French 19th century painters, chosen by writer René Huyghe. Painting over the greats in thick hot oils, Brice would make his stamp on art history, too, commenting perhaps on the volcanic, explosive impact of great art. After three years of accruing more copies on eBay, chuckling to himself as he either defaced or revered pages from the book, he realised the wood-pulp paper would deteriorate over time. So he now favours a cotton-based substrate for its durability, and wood for larger paintings, still commemorating the book by using sheets of identical dimensions, before hanging each painting in imperfect oak frames.

Brice visits Réunion once a year, a pilgrimage, one eye always on the Piton, in case today should be the longed for day. Whether in his Brussels studio, or once again in the land of his childhood, he’s continually pulled back to the spectacle of the volcano. The paintings in ‘Sang Dragons’ levitate in an ether between reality and fiction. On getting closer to them, the viewer’s imagination too might take hold – perhaps a faint corner of a room comes into view, or a spaceship readying its take off. These illusions draw us in – like the precocious Brice craving an eruption, we want it too. Our imaginings, like Brice’s long-desired eruptions, live on, percolating and rumbling under the crater.