The exposition, the confrontation, then the denouement. Classic story structure – three acts that begin with the introduction of place, characters and mood, followed by a confrontation, a problem to be tackled, then the resolution, just as everything seems to be unravelling. Without portraying events, and rarely even characters, Poppy’s paintings nonetheless have the feeling of chapters, of a narration being told, some even depicting book covers. In Cutting shade, the walls are scattered with traces of Poppy’s surroundings in rural Sussex – props, it feels, in an unfolding drama.

Act one, the exposition. After years of experimenting with different methods of printmaking, Poppy realised her eye was often more drawn to the unintended moments of the process – a faint fingerprint mark, or accidental smearing of ink – haptic mishaps, rather than the supposed subject. She’d admire German artist Andrea Büttner’s iPhone etchings – made of daubs from her fingerprints on a smartphone, scaled up to look like gestural paintings. Poppy wanted her prints to achieve a similar soiled and self-referential quality. She settled for a specific lithographic experiment: printing a photograph to scale on to a polyester plate coated in water and oil, which she manipulates with watercolour. She realised the materials underneath had to have a mercurial quality, too, mastering a technique by working on to suede and silk, often hoarding scraps from Ebay, or cutting up old jackets. The fabrics absorb oil and paint in different ways: the delicate silk soaks them up, bleeding the colour deep into its fibres – the tough suede made for blotchy stains, yet is sensitive to the lightest of fingerprints. 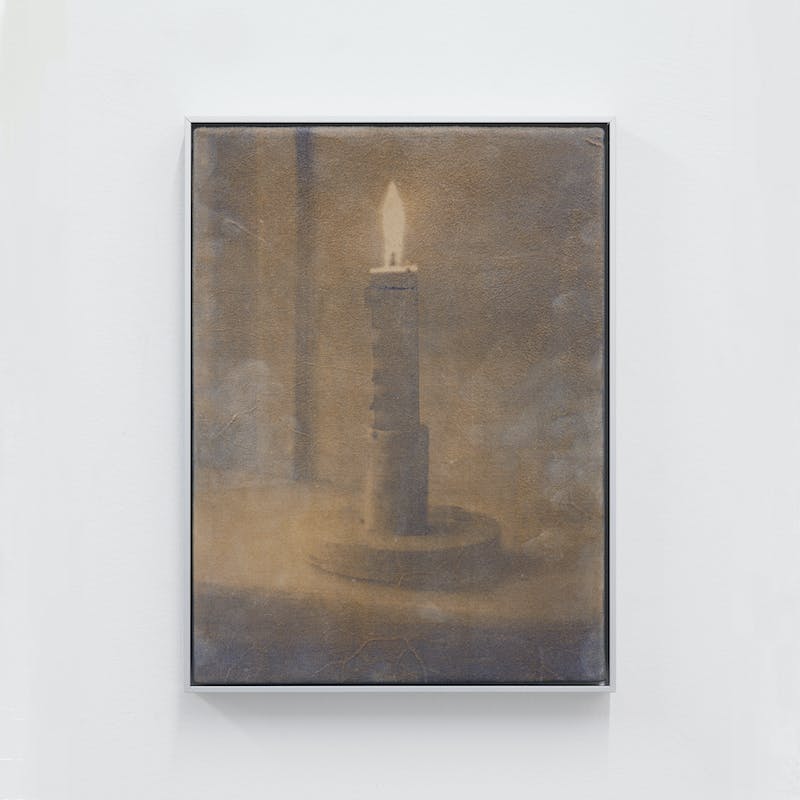 The confrontation, act two. What are these things, which she dubs as ‘objects’? Each teeters between printing, painting and photography. Human representation is absent, yet humanity is present, with faint impressions left behind. Her fingerprints fox the suede surfaces – remnants of deliberating and handlings in the studio. She’ll make countless decisions, reaching down further into her overflowing box of offcuts: some that are dyed, others left bare, their history never entirely obliterated. Her approach to subject is equally as complex, infusing familiar sights from her home in unfamiliar close-up: a half-empty glass, burning candles, shadows from a window. She takes quick snapshots when a vision blooms, cogitating over perspectives and crops before transferring one on to plate. In On Photography, Susan Sontag writes: ‘Photographs are, of course, artefacts. But their appeal is that they also seem, in a world littered with photographic relics, to have the status as found objects.’ Poppy’s ‘objects’ each retain the patina of being held or discovered from a different era. They quickly capture a fleeting moment, but hers unashamedly linger on a feeling – her three melting candles, or half-opened blinds, for instance, both metaphors for time passing.

Cutting shade is derived from a verse in Gertrude Stein’s book of poems, Tender Buttons. Stein used the expression to describe layers of pastry, but to Poppy it sparked a similarity with her process, ’shadowing’ being to mimic reality, as a shadow does. Once composed, stretched and framed in panes no bigger than the page of a book, Poppy’s denouement is hanging them on the wall for the viewer to begin the story. And so it goes round, in the telling and retelling, each piece a fragment of a passing day, like words briefly fixed to a page.