My laptop is a free verse poet

I realised my laptop had a knack for words and a great way of catching the mood when — while I was in the middle of signing an online contract — the touch bar changed my name from Ted to Tedious. Talk about intuitive: ‘Tedious Targett’ — well, it couldn’t be more accurate, that’s me in lockdown.

Before this strange occurrence, I’d barely noticed or used the touch bar. It’s that thin haptic strip in-between the keyboard and screen on a MacBook Pro laptop, which allows you to swipe as well as to click. It also has this insufferable habit of trying to finish your sentences by suggesting a few options for your next possible word/words/wording. As the tediousness of pandemic life has started to overwhelm me — lassitude could probably be my middle-name, if not my first — I have begun to submit to some of the touch bar’s interjections. In fact, as my own sense of certainty has diminished, so he (and I’m sure it is a ‘he’ — a really irritating, know-all of a he) has grown in confidence, developing quite a tongue-in-cheek wit with his algorithmic writing. In fact, he’s better than that: free verse is his thing, and he actually has the power to move. Take this, one of his first attempts:
‍

The style is decidedly reminiscent of ‘Martianist’ poetry — the surrealist movement that arose in the late-1970s, in which poets would relate everyday occurrences as if experienced by an English-speaking Martian (though he — let’s call him Mac —seems to want to rename it Martini poetry, which could also be fun). The defining writer of the movement, Craig Raine, in his cult classic ‘A Martian Sends a Postcard Home,’ describes human bedtime: ‘At night, when the colours die, they hide in pairs and read about themselves — in colour, with their eyelids shut.’ Mac’s capriciousness is even more adventurous than Raine, rendering that last clause ‘in colour, that’ll make you yourself.’

Martian poetry is often taught to children at school, as their scatterbrain, excitable minds make them playful wordsmiths. I found it fascinating how my touch bar —designed by Apple to assist everyday writing needs, from sending a text or snappy email — could instead uncover the more abstract and creative impulses of the deep subconscious. Writer Martin Amis described the Martian style as ‘clichés of the pen...clichés of the mind and clichés of the heart.’ Mac could write the clichés I couldn’t. Is he a more interesting version of myself?
‍

The Martianists were famous for scalding standardised writing, favouring ludic descriptions: ‘Rubbish smokes at the end of the garden, cracking its knuckles to pass the time.’ Mac’s couplets, like Raine’s, visualise and make perceptible ungraspable things: ‘When hope grows on you / Death is not the same.’ It’s as if my laptop has powers of empathy: Mac might not be able to feel, but he is, curiously, able to make me feel. 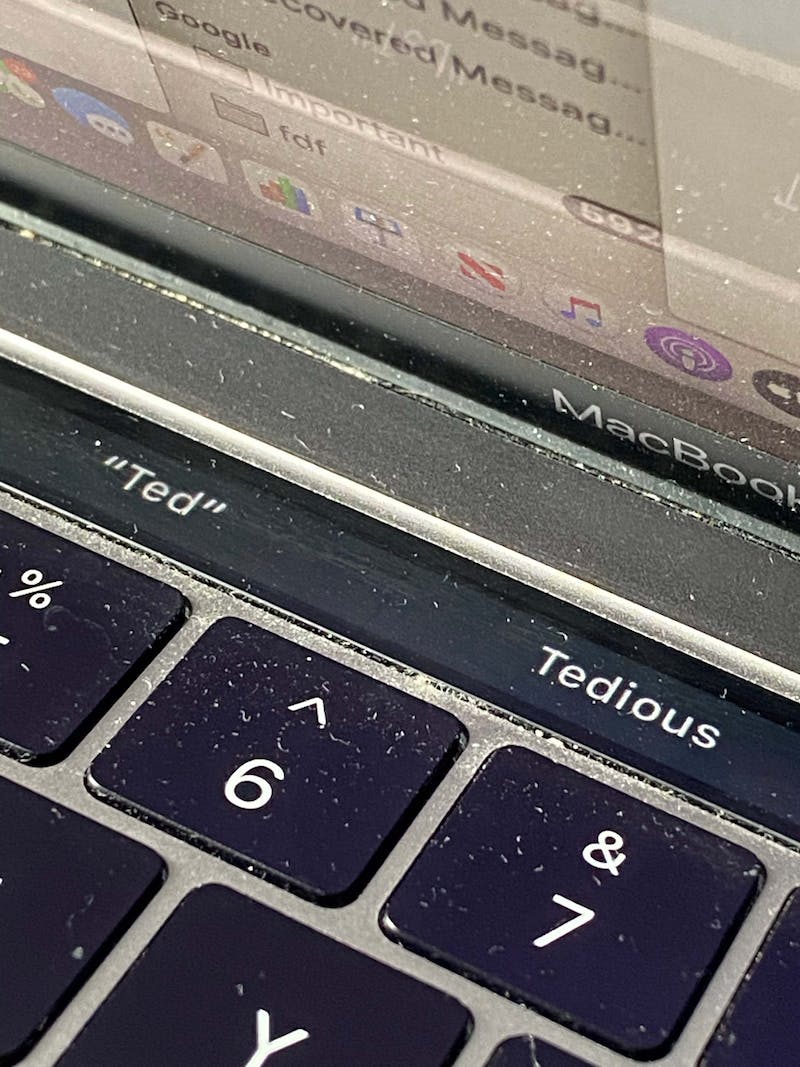