A millennial born in 1990, Yoora Lee memorialises her first decade, spent growing up in South Korea. The Nineties permeate most of her scenes – a longed-for world just as the technologies which are now all-pervading were also in their infancy. A mainstay in Lee’s library of references are screenshots from cult K-drama ‘Reply 1994’, narrated by a group of seven millennial teenagers on their path to adulthood, as they journey from the Nineties to the present day. Lee’s paintings similarly heighten time: often she’ll merge decades too, submerging images under layers of blue-green paint, as if they were dimly recalled flashbacks. The past never entirely erased, just watered down.

Before starting on a canvas, Lee makes sketches, as if she were storyboarding a film. She uses watercolours, her palette never straying from the cool bleached blues, greens and pinks indicative of films from her youth. These initial studies make sense of the converging worlds she portrays, blending stills from television shows she watched as a child, with more banal scenes from her life now – drinks at a bar, or eating cereal in bed. You’ll notice hands and feet are often plonked centre stage, leading your eye in, before you notice the bustling surroundings behind. Across most of Lee’s paintings, bodily extremities do the work that most reserve for discernible facial features: there’s as much character, she suggests, in toes and fingers as eyes and mouth. While perusing countless music videos for crops to paint from, she stumbled on the clutching hands of pop singer Harry Styles as he laments on his track, ‘Falling’. This is classic Lee: the lighting cast on Styles’ hands is intentionally dramatised, similar to another of Lee’s extensive references, Diego Velázquez’s all-encompassing painting ‘Las Meninas’, where evanescent lighting from a single window tinges theatrical contrasts on the figures. Lee collages Styles’ hands, as well as others she has sourced on the internet, directly into her boundless scenes, using every inch of available space to tell her stories. 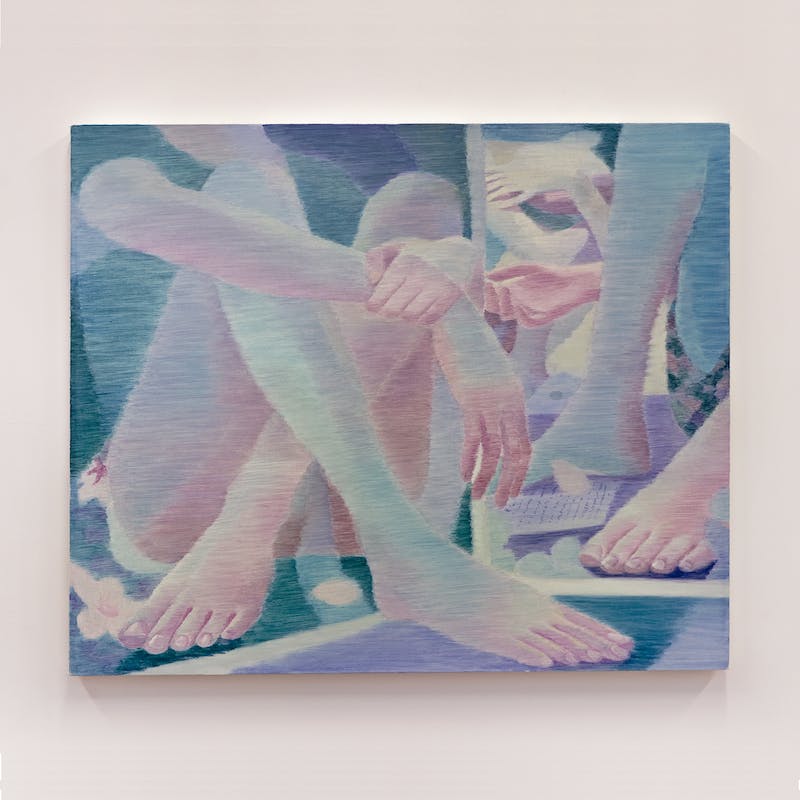 Once she's decided on her composition, Lee prepares her linen and cotton surfaces with a clear primer. As she favours translucent veils of paint, each layer ghosting the next, she mixes her paints with poppy oil as it replicates the liquid effect of her watercolour studies, drying slowly to a shimmering gloss. The pastel colours she works with are reminiscent of the iconic paintings by French Impressionist Georges Seurat from 1884. His pointillist technique – building up form with distinct dots rather than flat colour – chimes with Lee’s idiosyncratic horizontal mark-making. You’ll notice her lines follow the weft of the canvas, in some way emulating the glitching of an old VHS recording. The blotched application has the illusion of being behind a screen, building up the layers of our – and her – removal from the original experience, each scene as intimate – and, curiously, as remote – as the next, as she documents someone’s gatherings throughout a day. Lee will often reflect on artist Kai Althoff’s paintings: in particular, his painting of a family hanging clothes on a clothes line. In Althoff and Lee we see a similar banality of subject merged with a whirling vitality from their abundant layers and dexterity with brush. 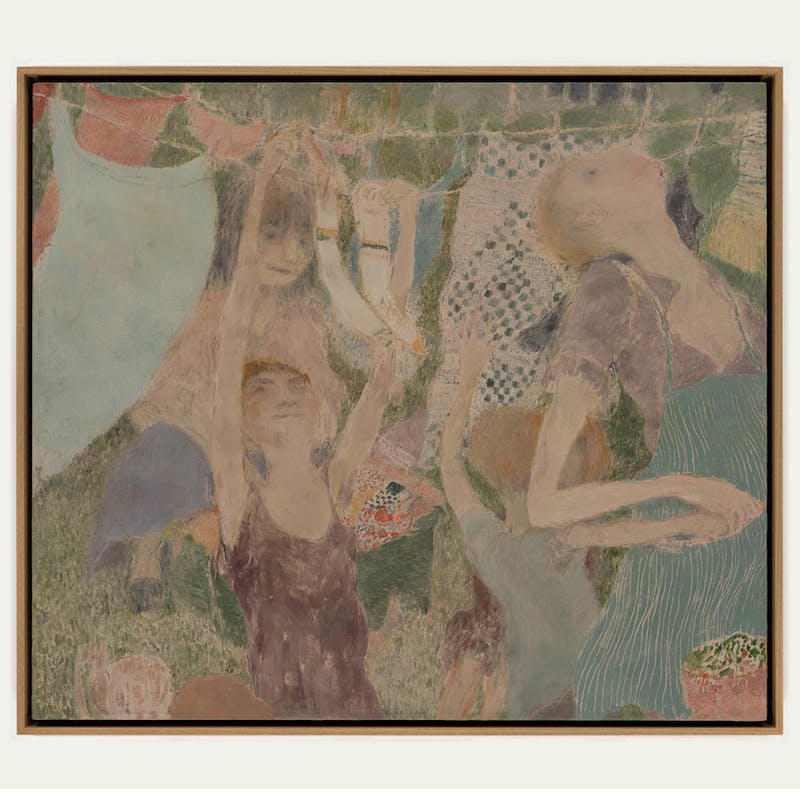 The paintings in Fallen Sakura look cut from the same scene, as do her paintings over the last few years. Drinking glasses, phones and cigarette packets, all synonymous to nightlife, often reappear on her tables, each curiously cropped or precariously placed. It’s as if she’s constantly double exposing the same panoramic moment, zooming into sections to illuminate them and give them special attention. Lee’s paintings present life cast through a kaleidoscope – each of her disposable elements repeating in on themselves, spiralling into one another on the surface. Her mercurial canvases are seemingly free of limitation and time – permeating across every fibre, always looking forward, but with an eye, inescapably, on the past.