For his first solo exhibition with the gallery, Japanese artist Soshiro Matsubara has transformed both floors into an expanded installation of sculptures and paintings. Golden Sorrow accumulates a decade’s worth of enquiry into the brief, tumultuous love affair between Austrian artist Oskar Kokoschka and composer Alma Mahler. They appear in countless iterations of artworks, their love an ever-beguiling tale about loss, hope and agony that continues to excite him.

Matsubara’s preoccupation with ceramic busts is partly inspired by Kokoschka’s act of desperation to lure Mahler back after their break up. When returning from service in the Great War, his lovesickness sparked him to commission a life-size doll of her, which he’d eventually decapitate in a drunken rage. Much of Matsubara’s fascination for Kokoshka’s eccentricities extends into his artworks. He uses a range of metallic glazes, costumes and artificial hair to present the couple in his own frenzied inventions. He adopts their love affair almost as his own, the artworks acting as props in his own fictionalised version of their story with a rejigged denouement. 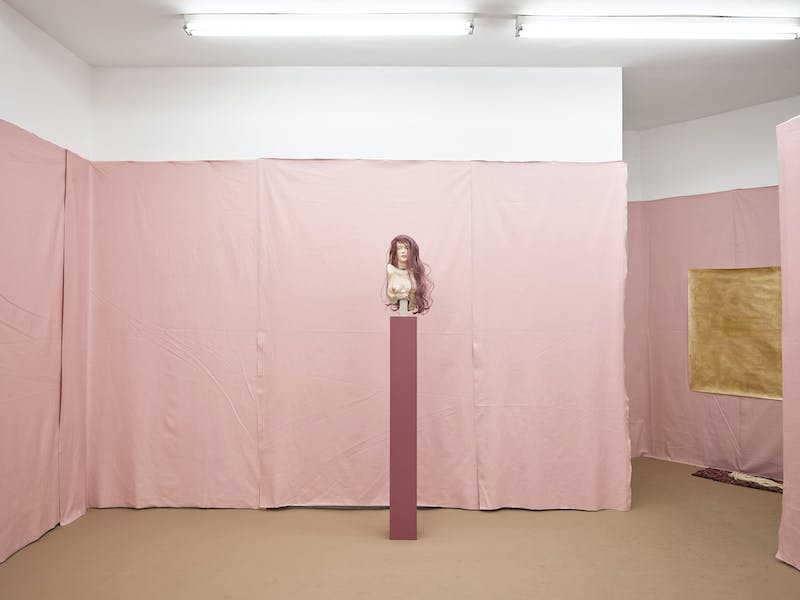 As each Matsubara exhibition passes, the plot thickens: in previous presentations, his muses are displayed flirting, or else they gaze solemnly at one another. Here, they’re in-separable, fused tightly together in clay and paint. To represent a spectrum of passions and emotions, the two floors are treated comparatively – upstairs, a labyrinthine pink maze houses ceramic figures on rug pedestals; a sparser downstairs counters with low-hanging lamps casting glittered light onto paintings. Matsubara’s attraction to their story alters with his every rendering of it, while each person who enters reinvents it again with their own understanding. And so the story twists again, with its hearsay, confusions, regrets and remorse…