Notes on Everything by British painter Tom Anholt recaptures the feeling of opening a picture book as a child and excitedly turning the page. In his solo show, he depicts swirling stories that oscillate in cauldrons of colour and shapes across the gallery’s partitioned exhibition space. Anholt plunges the viewer into a spiralling whirlpool of paint which you can choose to ride – as Ad Reinhardt famously did in How to Look at a Spiral (1946) – or submerge your perceptions. I chose to submerge.

Anholt is as much a raconteur as a painter. There are not many contemporary artists, or writers for that matter, who can set a scene better. Figures plucked from his reverie traipse across the canvas in technicolour pyjamas like lost sleepwalkers in scenery that resembles a psychedelic underworld. In most of the paintings, figures look trepidatious, glancing over their shoulders as they hide for cover under the shadow of a tree. In Time Apart (2020) a man lays in repose as he gazes at the moon in a sky of plum and indigo tones. The hinterlands in these paintings are reminiscent of the boundless scenery in Jan Brueghel’s Adam and Eve in the Garden of Eden (1640), where abundant forests, mythical horses and naked figures roam the landscape. By collaging in oils, Anholt juxtaposes these historic motifs against images suggestive of our accelerated world today – as housing blocks and passing cars bustle for attention on every corner, leaving little space left. 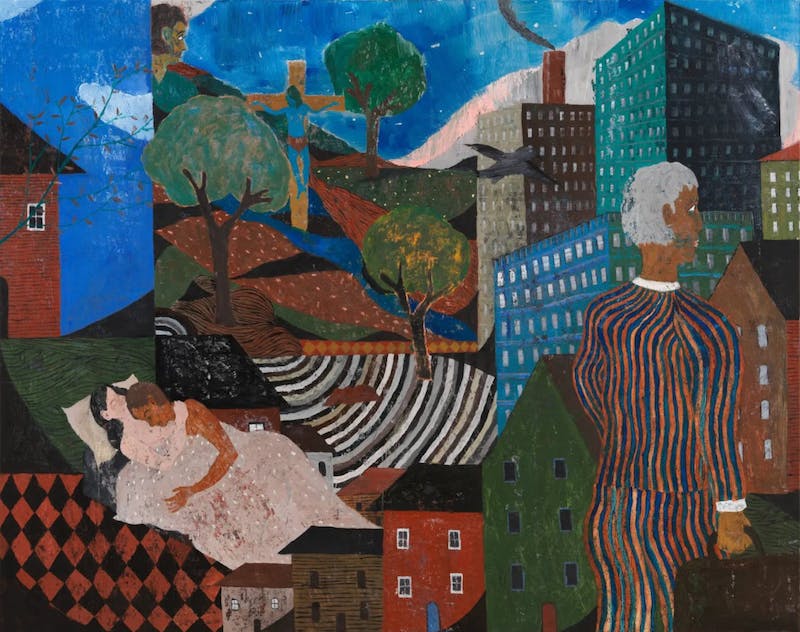 Tom Anholt, Notes on Everything, 2020

Like vignettes from a longer story, Anholt leaves introductions and skips straight to the end. Brazilian novelist Clarice Lispector in Agua Viva (1973) wrote, ‘I don’t paint ideas, I paint the unattainable “forever”.’ Alluded to in the title, painting for Anholt is like note-taking and a way of making ‘attainable’ centuries of art history, current affairs, and in the smaller works – which he refers to as ‘portraits from life’ – record the people closest to him. In New Dawn (2020), a mother caresses her newborn child – their reptile-like skin, abraded by the scraping of a pallet knife, leaving traces of previous marks beneath. By removing the paint, Anholt – almost like an archaeologist – uncovers centuries of depictions of motherhood in art dating back to the 14th century. One of the larger works in the exhibition, the titular Notes on Everything (2020), depicts an all-encompassing scene of a couple confined in bed as a crucified Christ looms above. Anholt’s worlds are continually in flux: the effect is similar to the way dreams chase one another night after night, traversing through centuries and dimensions – or how episodic novels and boxsets leave cliffhangers. As a viewer we’re piecing together a puzzle which may never actually have an end.

His paintings somersault in a spiral of ecstasy, unfolding with the danger of a coiled snake waiting to bite. Like life itself, a sense of foreboding lurks on every corner – except that Anholt has removed the corners.