Curtains mark the beginning and the end. We tug the world open on waking and draw it to a close at dusk. Much of Mary Stephenson’s paintings encapsulate the moment we grasp at fabric readying to enter or leave a day, as a glow of light peers through a gap or slowly fades away. Contrary to her more bustling paintings of the last few years, which have often featured assortments of imagined figures mingling and prancing across vast hinterlands, each painting for ‘Suddener than we fancy distills scenes devoid of any visible presence. These are intervals after the fact – moments when the drapes are ruffled, when an empty swimming pool still ripples, when the bed sheets are warm.

On deciding what to paint, Mary works fast, intuitively blurring snap decisions with slower, internalised strokes. Both spring from her unconscious. She refers to painting as a ‘fertile ground, growing and mutating as more paint is applied’, each composition distilling marks made spontaneously, springing from nature almost like a blooming plant. Her interest in light is largely inspired by her absorption with film, particularly movies where super-saturated colours collide under a faint mist. Her canvases also adopt the same ratio of a cinema screen, wide and panoramic, doubling as backdrops for viewers as they shuffle across the paintings. Of the three largest screens, like peering through a keyhole, Bath, glistens and Young Room open into two vacuous spaces, emptied but for the ghostly trails of a recent human presence – a foaming hot bath and an unkempt bed. In Deep Pool, distorted spangles of light on a swimming pool ebb and move as if someone has hastily left, while the incongruous remnants of a meal – cutlery and a plate – can be spotted sinking to the bottom. Here are Mary’s sets for her fictitious films, unpeopled up until each backdrop subsumes the onlooker. In the smaller paintings, much like her preparatory storyboard sketches, they magnify into props from the scenes: a white sack, folded napkins and a small box; each like a MacGuffin from detective fiction that’ll often reappear elsewhere, in another painting, a clue left behind. 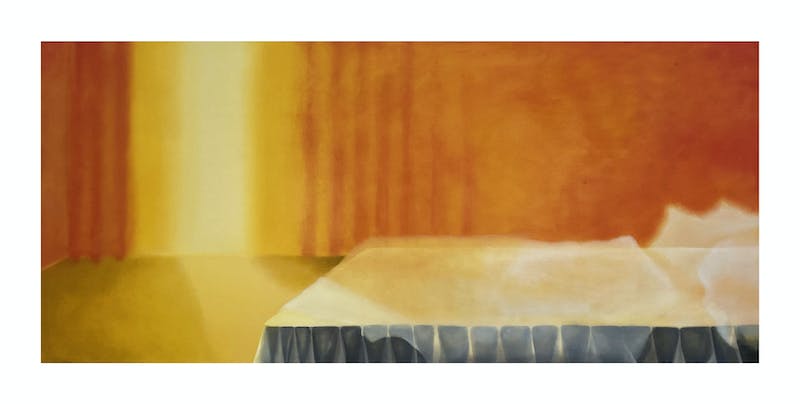 Just as a lens sharpens its focus, Mary guides our eyes from wide angle to macro, sparing us the full plot but rather drip-feeding us hints and traces. In the only painting with a visible character, Early Feed, a swaddled baby gorges on the stem of a flower, later reappearing in ‘Untitled’ and ‘Small Box’. For Suddener than we fancy, the title taken from Louis MacNiece’s poem Snow, she refrains from indulging in excess, limiting her palette to only four colours – red, yellow, blue and white – and stripping back scenes to a minimum; sets before the actors have walked in. We’re encouraged to consume her more subtle moves – folds of fabric in ‘Pillow’ invite the eye to a neat parcel of cutlery bobbing on a pillow, and in the ambiguous painting Yellow, a seemingly unfurled petal leads to a sinkhole to nowhere.

Mary constantly shifts our expectations, offering small apertures into other dimensions or else leaving them missing an exit all altogether, blind alcoves. As the red curtains close to mark the end, the paintings still glow, certain props emerging as if in a recurring dream, popping up when you least expect it.