In the wake of his grandfathers death last year, Anders Davidsen started painting seascapes. In particular, a sun setting beyond the roiling seaside horizon. He gifted a painting to his grandmother as consolation, to bring back memories, times shared fishing and swimming in a nearby fjord in northern Denmark. The more he painted, the greater his fixation would become – each painting taking on a life of its own, coming with an added recollection from his childhood observing subtle shifting patterns of light onto water. He's continued to paint this phantom seascape, hooked, reeling back to the pervading colours his reverie and memory invent, finding solace as so many of us do in the collision of light, air and water.

His paintings trace the passing of time – seasons eddying into one another like undulating waves on the sea breeze. In some, you’ll notice colours are more muted, cast behind a winter's fog; in others reflections of deep reds mottle the ocean, reminiscent of a humid morning's haze in summer. He works on linen, painting one at a time, as if logging a diary and documenting hours of the day. Anders prefers applying paint directly from the tube, using force to disperse colour across the surface, before removing it to reflect the shimmering reflections on water. The process is meditative, an all-consuming amalgamation of mining his memory and excavating the paint as it dries. Because these are not painted from life: the only reference he uses is his imagination. German artist Peter Dreher painted 5,000 versions of the same empty glass, tracing the changing reflections as the sunlight fades. Anders is similarly captivated by the sun's progress. And the more he paints, the more real his fantasies become. 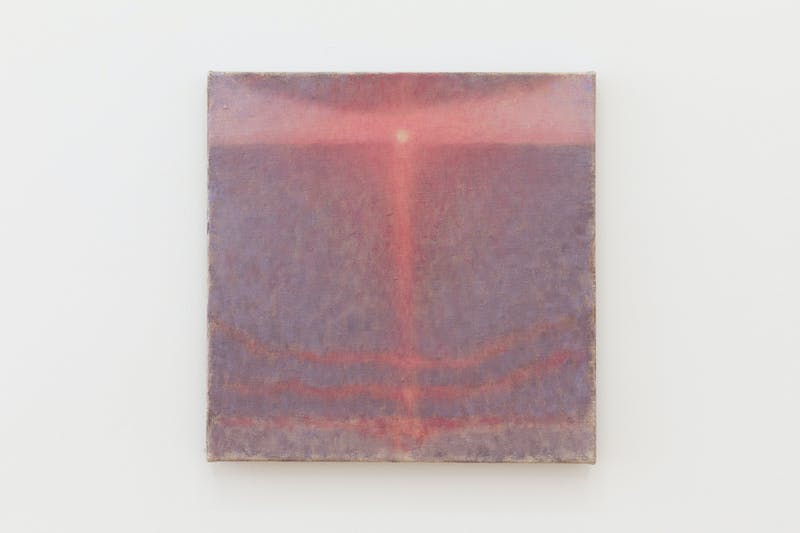 Surprisingly, he begins his paintings unceremoniously with muddy brown undercoats, to further deepen the surface. It’s only after many layers on top do the images start to dance in spangles of movement. In the red-hued paintings, the sun's glitter looks as if it’s been daubed on with his hands, Anders likening it to an epithet he recalls in Homer’s ancient poem ‘The Odyssey’: ‘rose-fingered dawn’, describing how sunlight touches everything you see. Homer also wrote of the 'wine-dark sea' – that, too, is how it can look to Anders, glassily opaque. In the more muted paintings, there are chimes of Belgian painter Luc Tuymans; a subtle glow buzzing behind clouds of greys and purples. The diluted and bleached colours make the pictures seem like overexposed photographs – the blanches in Anders’ paintings further accentuating the textural linen behind. He consciously avoids overworking or ladening the canvas with too much paint, leaving some pockets of weft more visible. Like the vast oceans Anders paints, he prefers a seemingly endless possibility of ebbs and flows, the visible and the absent.

And – when will it cease, reach its end? Anders intends to keep treading the tide, each version he paints leading inevitably to the next, like the endlessness of the waves. The scenes scatter across his studio wall in varying sizes; windows into an imagination where the fading sun always beams bright.