Like any good wordsmith, with brush in hand, Stephen Polatch is a lucid raconteur. His work, his tales, often feature reappearing figures and animals cast against glowing vistas, and I have been eagerly awaiting his solo exhibition, to read something like the complete story. Walking into the gallery’s spacious interior, I’m instantly struck by the sheer quantity of paintings on show – plus there’s a scattering of more works on paper that trickle through another equally sizeable viewing room behind. This isn’t so much an anecdote or two but a richly described saga in many parts.

The most memorable pieces in the exhibition are his nine oil paintings in the main gallery – each, busy portals into swirling suburban scenes from where Polatch lives in Glasgow, with pylons, turbines, skyscrapers, rivers all looming behind. Reverberations of artist Marc Chagall and his illustrative paintings of engrossing dream-like scenes, breach every square inch of the canvases. Polatch’s are equally sprawling, but are cast through a contemporary lens, often depicting the accoutrements of modern excess: in Mayhill II, a girl takes a selfie wearing a shiny puffer jacket and a giant aeroplane wing overshadows Falling. The cartoonish figures he paints, often in couples, or else solitary, also look inspired by Chagall – floating freely through boundless skies, or bobbing on boats in eddying waves. At such small scale, Polatch manages to capture movement expertly: in Flight Simulator the water below a passing plane ripples into a glowing whirlpool, his mark-making like engravings on a lino board; in Clyde Boaters, a fish plummets into a perfectly defined spiral descending into a honeycomb-like tributary, the mottled paint blotching puddles of colour. 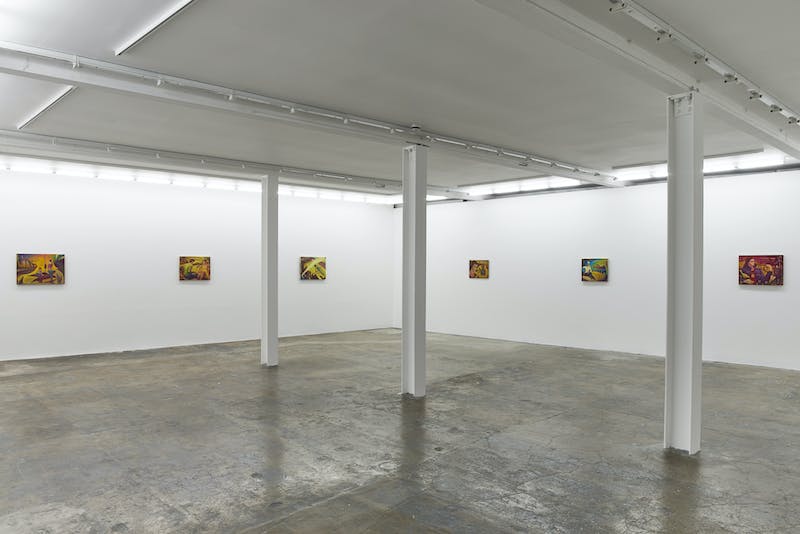 Each painting has a glow, a radiance emanating from behind. Most of his paintings to date do too; a distinct warmth of ochre illuminating the scenes, with the subtlety of sunlight beaming through curtains. He’s previously dabbled in using using egg tempera paints, the finish more muted and muddied. Here, the paintings look uniform, vibrant, vivid and cropped from the same scene – a storybook, but where the in-between moments have been torn away and only the drama remains. You’re compelled to fill in these gaps, the paintings on display only episodes from a much larger narrative told over a lifetime.

At the rear of the gallery, it’s a whole other exhibition: the prologue I might have preferred seeing when I walked in. A room of nine framed works on paper, some of which that are studies for the oil paintings in the main gallery. Where the paintings punch with exuberance, his watercolours are much quieter, and make their claim for attention with a lighter, defter touch. Equally as sprawling in subject matter, they seem sodden and wet, perhaps a nod to the exhibitions title, Clyde – the river winding through Glasgow. Almost like a retrospective exhibition, spreading across the walls and two central vitrines, more and more sketches emerge. It’s as if all is now being disclosed, enrapturing me further in his ever-churning worlds.

I was especially captivated by the more introspective studies, with their sense of lament and melancholy. In the Pipe III on rice paper is a macabre portrait of a girl gazing into a sea of devilish faces; then, in Flight over Pond, she’s looking into a swaddled baby looming below. The exhibition finishes with another oil painting, and it’s probably his most surreal concoction, too: a somber man in a cowboy hat smoking while a pipe-bearing cat balances on a wall behind him, titled, appropriately enough, Smoking Cowboy with Cat. In many ways, it’s a perfectly measured cliffhanger: a compelling yet befuddling painting that takes us further into his imagination, leaving us craving the next instalment. Stephen Polatch can take a normal day in Glasgow and turn it into a convincing illusory tale – I’m hooked.