Are you aware of yourself moving around the room? The ubiquitous etiquette on entering a gallery – an awkward hello, the tentative shuffling behind a stranger’s footsteps and the finickity orbiting of an artwork – makes us makeshift performers in any exhibition. In Sung Tieu’s installation What is your (x)? the effect is exaggerated. Where we go and how we think are deliberately choreographed in a captivating mise-en-scène of mirrored plaques and stainless steel doors. You’re encouraged to hold on to your inhibitions in here, listening closely to the cogs turning in your brain, as if waiting for your cue to go on stage.

Immediately inside the gallery, we are met by a second door inside a partitioned cube. Stepping into another dimension – our feet wrapped in cling now – Tieu like a magician, removes her performers out of reality and into a game against ourselves. Inside a void of whiteness, the room’s lighting has a similar sterility to the final scene in Stanley Kubrick’s 2001: A Space Odyssey, from the white carpeted floor and glaringly high-lit ceiling. On each side of the room are four silkscreen plaques, eight in total, called ‘scenarios’ screwed to stainless steel doors that mirror psychologist Carl Jung’s personality tropes of the human psyche. When I say mirror, I mean that precisely – the shining doors reflect our faces as we read them. It’s uncomfortable standing so exposed in this stark box. The doors are bolted with the kind of tamper-proof fittings commonly used on grilles in prisons or safety-deposit boxes and which are impossible to remove without a unique tool. They become portholes of introspection as we become ever more discomfortingly conscious of our thoughts and our movements. Meanwhile, ingenious rhetorical questions and predictions, all written by Tieu (‘Why be satisfied with hard work and patience when you can have it all immediately?’ ‘You can be impatient, and you get quickly flustered about questions you don’t have the answer to’) seep across our synapses.

Tieu draws on the language of horoscopes – somewhere between preaching and pessimism – and the prose of capitalism. Each plaque is typed up in American investment bank Goldman Sachs’ brand-spanking-new typeface, Goldman Sans. In using this font, described as ‘neutral, with a wink’ by the bank, Tieu is trapping us, again, into another game, where the knowledge we let in is almost monetised and traced. Because, after all, banks know us best, right? 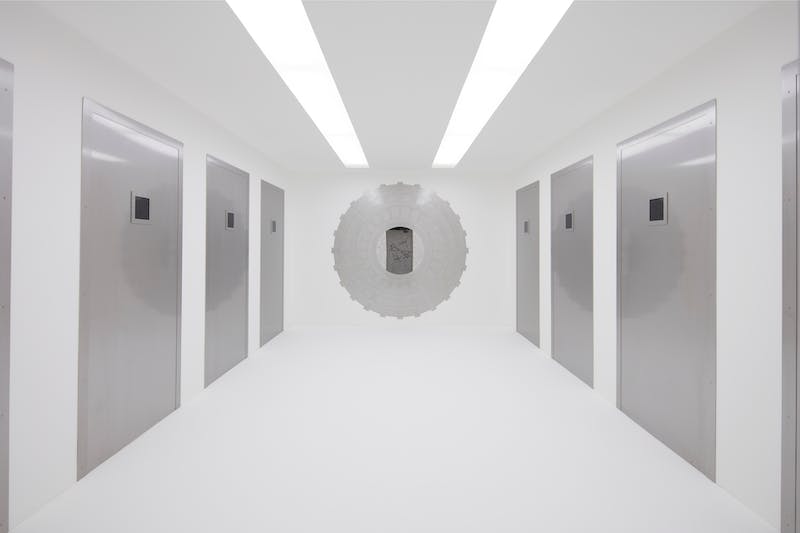 With this in mind, and on the subject of money, at the foot of the room and on the back wall is a hulking bank vault – with a title just shy of 50 words, which I’ll abbreviate to Natal Chart (2020). The vault is made of steel, a spherical mirror on which Tieu’s astrological birth chart has been printed, and all of it meticulously pieced together with the ever- present tamper-proof screws. What’s striking is that – even though this is a kind of self-portrait of Tieu – we’ve reached a point in the game where we see ourselves again, but with the most clarity. This immaculate mirrored vault compels us to reflect on ourselves, and the absurdities of banks and the language of money, which are, she suggests, every bit as mystical and mystifying as the illusions of astrology.

Tieu, who is renowned for making sensory installations with palpitating soundscapes, has previously noted in an interview that ‘What’s most appealing about sound is its omnipresence. You don’t need to see it in order for it to occupy your mind’. But, surprisingly, What is your (x)? uses no sound. The omnipresence here is abject silence and the faint scurrying of plastic-covered shoes – leaving just the loud noise of our own internal dialogues ticking to the unmoving cogs of the vault. What is your (x)? is a room you may find yourself returning to many times after you’ve been. After all, games are notoriously addictive. That’s your cue…